hello from Austin, Texas.
i saw this image on a wall in the East side, and thought it was pretty funny. (people don't have to wear helmets here when they ride their huge motorcycles... ) 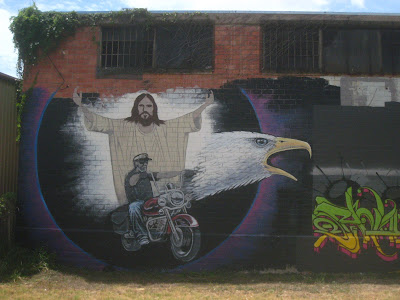 we spent a week in Kansas City, which was really nice, we got spoiled by A's family, and i fell in love with some little dogs... and A's sister's wedding was really great, it was original and happy and i was really glad to be there. i don't have any pictures from there just now, but should post some of all the cupcakes, if nothing else! (K&S had vegan cupcakes instead of a wedding cake, and the whole thing took place in a little cinema, complete with movie trailers and ping-pong-tables).
we took the Greyhound from there to Austin (which was quite a funny experience, mostly due to the drivers we had: first an elderly man who did everything in slow-motion, was extremely sensitive to ciggarette-smoke -ie he couldn't drive for 1/2 hour after getting a little whiff of it outside- and we ended up over an hour late. but then! the next driver, who got on in Oklahoma, was a superwoman. big, tall, whitehaired and amazing. she was shouting out information while driving -the PA system was broken- we could even hear her at the back. and we felt that she would do anthing, whatever it takes, to get us to our destinations on time. and she did, so we didn't miss our bus from Dallas to Austin. also, there was something wrong with the AC, so with the first driver we were all turning blue and shivering cause it was so cold, but with the second driver, she kept turning it on and off and it was a perfect temperature and we could sleep. aah.)
we spent the first 2 days bussing, cycling, and driving a moving truck around; A got himself a flat and moved in. those two days were a bit hectic, but it's amazing how smoothly things have been going. it's good that it's not as hard to find flats here as in Sweden! the 1st night we stayed at a lovely B&B, it was at a welcoming hippie's house, who's planning on moving to Costa Rica and has all sorts of animals. (i invited him to stay at my and all my friends' and family's houses all over the world, i hope nobody minds...) He tried to sell us all sorts of things, but also gave Andy a very nice shirt that another guest had forgotten.
the 3rd day was mostly spent on the couch...
we've also gone swimming, (there's a really great natural pool called Barton Springs) been to a BBQ, listened to a bit of music, shopped in some thrift-stores, sat in the library, and had the odd beer here and there. and been to a park, the Mckinney Falls State Park.
and ... (this is quite exciting) tomorrow we're renting a car and driving down to Big Bend National Park, to go hiking. :-). i'll post some pictures after we come back next week.