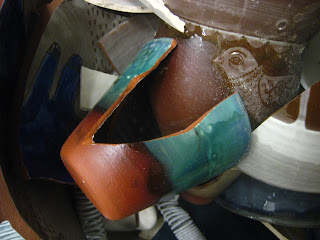 the firing i did the other day didn't turn out so well. some pieces were alright, but some ended up in the pot-bin. it's not easy.
i'd mixed up a new batch of glazes, and they were not diluted enough. and so they bubbled horribly cause they were too thick. another mistake was that i'd programmed the kiln wrong, so it fired too hot. so lots of mistakes to learn from. i probably won't do those two things again any time in the near future, anyways.
but i can refire some of the pieces that didn't have tooooo many bubbles. J, who shares the same studio, let me borrow his dremel.
and i can always make more pots. 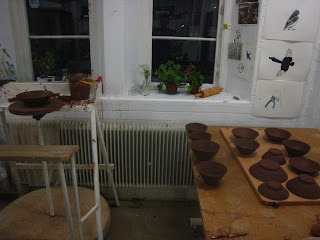