and now i´m in Göteborg.
i´ve moved in with my brother, his girlfriend, her little girl, and the black and white cat Aska.
i got a part-time job, and i also just found a studio, that i´ll be starting in towards the end of this month. it´s a ceramics studio, shared with 8 others who seem really great, so that was lucky. more about that later, no doubt... i´ll also be doing some pottering in my dad´s outhouse. my aunt gave me a kick-wheel a while ago which i am trying to paint, but since it is so cold i have only managed one coat so far (it doesn´t want to dry enough for a second coat).

here is a picture of the bike that is taking me around G. my gran found it by the side of the road in their little village, where it had been lying abandoned for at least half a year. she phoned the police, and after another half a year went by and no-one had claimed it, it was hers to keep. since she doesn´t cycle much anymore, she let me borrow it. it needed some new spokes on the back-wheel, but otherwise it´s not bad. but i must admit, i do miss my other bikes... 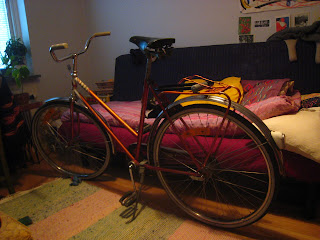