anna and i took the overnight bus down to london, arriving with sore bums and heavy eyelids, as
one often does after that journey. after some coffee and knitting at the station, we went walking, armed with a little a-z of london. 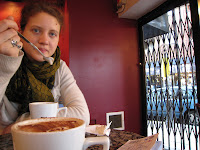 we managed a fair bit in one day. i 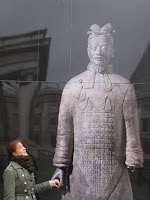 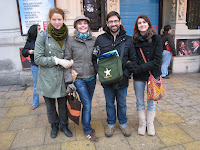 photos of much of it, but here are some. it was so brilliant to see my good friend reetta again, we've known each other since we were 8! we also got to meet her lovely man and his sister, and two other of
her good friends which was great.
anna bought 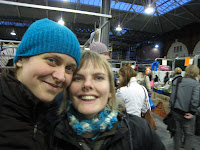 me a luxury-soya-chai, and we went to the british museum. (we didn't see the actual chinese warriors cuase of lack of money and time, but anna held hands with one of them for free, as you can see.) we went to some of the more like-able parts of london that i hadn't been to before, which was good.
i also saw some people from the organization i worked with in afghanistan, which was lovely, strange, surreal, and more. they were hosting a preview of the film 'the kite runner' at a posh hotel, and then we had dinner afterwards. it reminded me of some of the things i found difficult when i was there... but i miss afghanistan. i wonder if i'll ever go back?
i slept over at a friend's, who is in turn staying with a friend. by that time my brain was so tired and full of different things that i could hardly think, however, and it took me a while to realize who he was. we're showing one of his films, 'the voice of the moon', at the afghan festival in february; it's well worth seeing!
then on the train i slept and slept, and the sun was shining in glasgow when i arrived, tired and not wanting to get to work on the essay. but i have to. there aren't many days left now till the hand-in!
which means, not many days till i see andy!
in fact, only 5!
Posted by ester svensson at 12/10/2007 05:07:00 pm