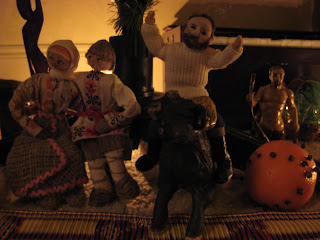 i'm off to see andy tomorrow!
it's crazy, brilliant, amazing, and almost too good to be true!
(the only damper on the excitement is the huge amount of flying it involves.
glasgow --> dublin--> chicago--> and finally austin
i'll have to do a whole lot of virteous unharmful things to make up for this years
flying here and there.)
the valiant jubilating man you see riding the black sheep usually accompanies me when i go pedicabbing; he's called sigfrid or wee-man, depending on who you ask. and now he's going to be making the epic journey to america. he'll have good stories to tell the others when he comes back. the centaur has been to ireland, and also a.t.p. it has to be said. and some of them come from russia, another from cameroon. the crow and the sheep from yorkshire, the turtles from germany and edinburgh, made by a chinese and an australian. so i suppose they all have their stories. 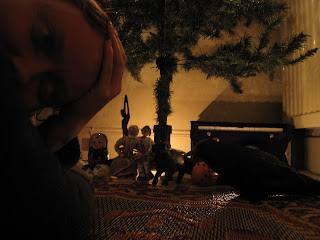 as you can see, we made a start on christmas.
i felt free as a bird almost, after handing in the essay (finally!), and the term finished, and soon going and all, so it was all good.
in the pictures you can see our collection of flat-mascots, all sitting in proud arrangement under the christmas tree that morag bought. hector was eating it for a while, but he must've realised that its fake and tasteless. so far most of the little animals and birds and glitter and everything are still hanging up.
i even made lussekatter, (swedish saffron-sweet-bread for lucia), there was a good recipe: 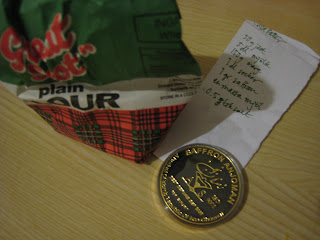 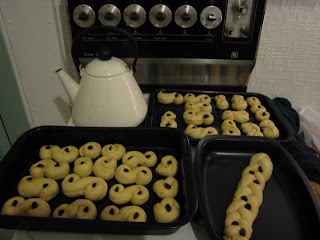 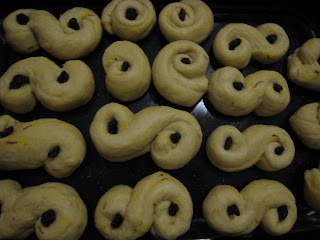 http://www.vegan.nu/recipes/?recipe=417
they turned out nice. if anyone wants the recipe in english give me a shout.

Hi Ester, good to see you've got your blog up and running. good luck with your trip, the lussekatter sound nice, do you have the english version handy? my son might like to make them over the holidays.. best wishes, Anne