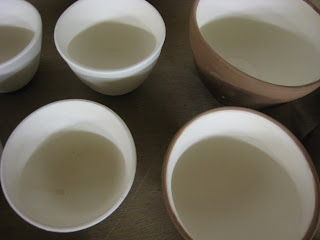 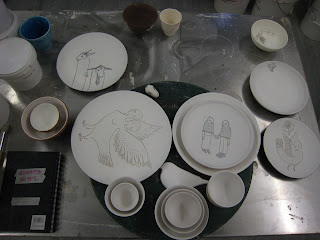 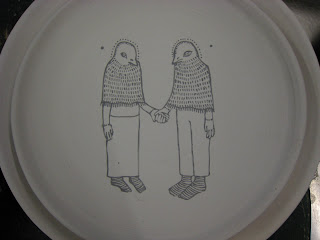 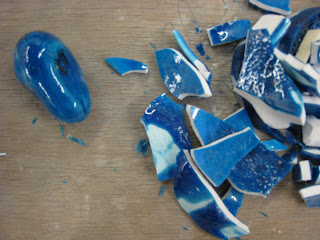 but after the firing, almost everything was a disaster... 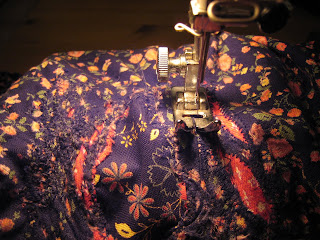 however, the sewing machine works!

bad thing ~ i spend most of yesterday glazing things i've been making so far. this morning i woke up anticipating opening the kiln to find sparkling turquoise bowls and plates, magically transformed from grey glaze to translucent glass. it's turquoise, yes, but half of it shattered as soon as i touched it (i'm working with quartz-paste, and am struggling...), and the rest of it, although still in one piece, is far from what i had in mind. a bad firing affects me more than it should...
good thing~i had a chat with my tutor, bill, inspiring some great ideas that i feel quite excited about for next term. (that was before i opened the kiln).

good thing ~ the sewing machine that my friend mi-won gave me, finally has all its parts assembled and tonight i used it for the first time! i mended my favourite shirt, that used to be my grandma's and then anna's, before it came to me, but i haven't been able to wear it for a long time due to the huge number of holes in it. but now its fixed. i also sorted out some jeans that were a funny shape (or else it's my legs that are a funny shape).
another good thing ~ i made nice pumpkin soup from a beautiful deep orange little organic pumkin, and it turned out lovely.

and another good thing ~today it's only twenty-six days till i see andy!
a bad thing ~ that means it's also only twenty-four days till the essay i'm so struggling with has to be handed in, bound and completed.

another bad thing ~ i'm not keeping on top of emails and letters and organising things...
a good thing ~ i don't have nearly as much of that as, for example last year.

a good thing ~ all these things are quite inconsequential and actually, life is good. its funny how perspectives change, how i get used to things... a bad firing won't kill me, and thankfully no-0ne else either, and i've learned at least what doesn't work...
Posted by ester svensson at 11/20/2007 10:14:00 pm