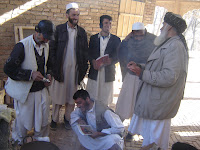 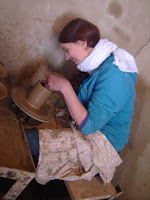 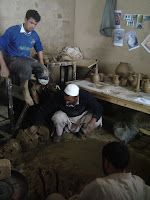 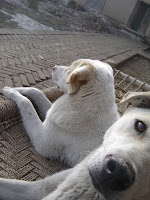 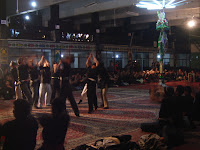 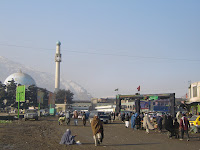 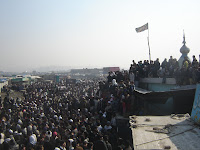 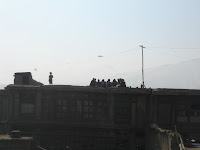 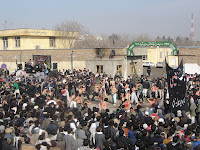 hello again,
there were a few days that felt like spring. i can't wait for warmer weather! we've had pots drying outside in the sun=).
we had a tile-maker from Mazar-e-Sharif here for a week to teach us, which was good and fun. there were some good discussions, and we all learned new things. it was slightly worrying to be melting lead for glazes, and when he started saying that the Istalif kilns were rubbish infront of all of the potters, but on the whole a really good exchange.
the gas kiln STILL isn't finished, it's making me a bit crazy and despondent, but i guess things have to take the time they take. some days i feel frustrated and useless, and others days i'm really happy. or rather up and down several times a day! it's never boring.
yesterday was the 10th day of muharram, which meant a holiday, and so we went down to the old city where there was a fair amount going on, as you can see from the photos. we were also invited to two epic lunches; i felt like i'd never have to eat again! but of course i did... a couple of nights before i went along with a photographer who's staying with us a wee while to a big mosque full of young men wearing black shirts, seated around the room beating themselves to the songs and chants of a boy's amplified echoing voice. i was treated like a queen, given green tea and shown up to the balcony. unfortunately (!) i dropped my camera on a small boys head; the boy cried and the camera broke. amazingly, when i bashed it around a bit, it just started working again! crazy and excellent. i wonder how the poor boys' head is though...
but yes, interesting and disturbing... and to hear the sunni's talk about it all doesn't give me too much hopes about equality and un-prejudice and freedom-of-belief...
lots of other things have happened as well, but internet is dead slow at the minute so i'll leave it to your imaginations; (probably more interesting that way anyways).
*
Posted by ester svensson at 1/30/2007 02:54:00 pm